With a spirit somewhat akin to that of Ig Nobel Prize winner Troy (built a suit of armor to protect against grizzly bears) Hurtubise, comes “One man’s dream project to fly from Ireland to Africa by lawnmower gets under way this week“. The story is reported, with that headline, in The Journal: 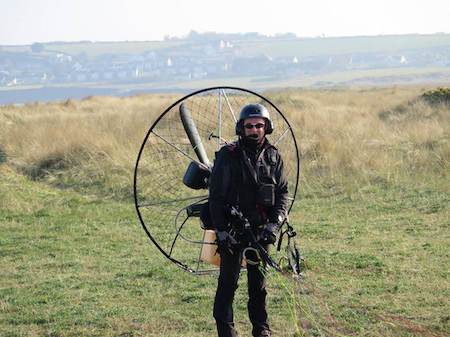 A FEW MONTHS back, we brought you the story of 52-year-old Oisín Creagh – the Dublin-born, Cork-based architect with a slightly-odd project on the go.

Yes, Oisín is a paramotorist – a form of aviation basically involving the equivalent of a lawnmower engine and a parachute and precious little else. He’s planning to fly one of these things to north Africa, a trip-distance of 3,000 kilometres, to raise money for Gorta-Self Help Africa and its operations in drought-ravaged Ethiopia.

And it all kicks off this week.

Oisín is set to fly his ‘wing’ (as a paramotor is known within the sport) across the English channel before turning south and heading across the Straits of Gibraltar to Africa.

BONUS: A performance of the beloved song “Up in the Air, Junior Birdmen!“: