The 1995 Ig Nobel Prize for dentistry was awarded to Robert H. Beaumont, of Shoreview, Minnesota, for his incisive study “Patient Preference for Waxed or Unwaxed Dental Floss.” The study appeared in the Journal of Periodontology, vol. 61, no. 2, Feb. 1990, pp. 123-5. The study says: 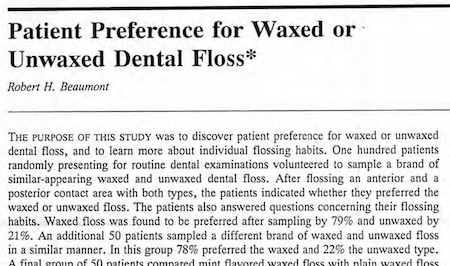 “The purpose of this study was to discover patient preference for waxed or unwaxed dental floss, and to learn more about individual flossing habits. One hundred patients randomly presenting for routine dental examinations volunteered to sample a brand of similar-appearing waxed and unwaxed dental floss. After flossing an anterior and a posterior contact area with both types, the patients indicated whether they preferred the waxed or unwaxed floss. The patients also answered questions concerning their flossing habits. Waxed floss was found to be preferred after sampling by 79% and unwaxed by 21%. An additional 50 patients sampled a different brand of waxed and unwaxed floss in a similar manner. In this group 78% preferred the waxed and 22% the unwaxed type. A final group of 50 patients compared mint flavored waxed floss with plain waxed floss of the same brand. In this group 56% preferred the mint flavored waxed floss, 24% the plain waxed floss, and 20% had no preference. A combined total of only 29.5% of the patients claimed to floss daily, 53.5% floss irregularly but at least once a week, while 17% do not floss even once a week. Waxed floss was purchased for home use by a combined patient total of 57.5%, unwaxed by 32%, and neither type by 10.5%. An unsubstantiated belief in the superiority of unwaxed floss has persisted to the present time. Since both waxed and unwaxed floss have now been shown to be of similar clinical effectiveness, it may be prudent for dental professionals to recommend the often preferred and purchased waxed floss for more patients than unwaxed after evaluating individual needs and preferences.”

This was the first and, thus far, only time an Ig Nobel Prize has been awarded in the category of dentistry.

Here’s a video in which a deep-voiced announcer announces how an unnamed copywriter wrote that people should floss their own teeth: