Many might have wondered, at one time or another, about the purpose of the prominent human external nose. Of those people, Howard D. Stupak, M.D., who is Assistant Professor, Department of Otorhinolaryngology, Head & Neck Surgery and Chair, Department of Otolaryngology at Jacobi Medical Center, Albert Einstein College of Medicine, Bronx, New York, has a theory. His theory is that the nose may have evolved over millions of years, becoming larger due to its evolutionary advantages as a snore-mitgating device.

“The purpose of the prominent human external nose remains unclear.”

– he says, nonetheless going on to outline his hypothesis :

“The external nose may play a compensatory role in the aerodynamic support of the upper airway, which in humans has been severely narrowed to enable spoken language. During times of decreased muscle tone, the wing-like soft palate may be supported by airflow patterns, creating ‘lift.’ Serving as an aiming nozzle, the external nose may, by creating a curvilinear intranasal airflow pattern, adjust the ‘angle of attack’ of airflow contacting the palate, thus enhancing lift and facilitating opening of the nasopharynx.” 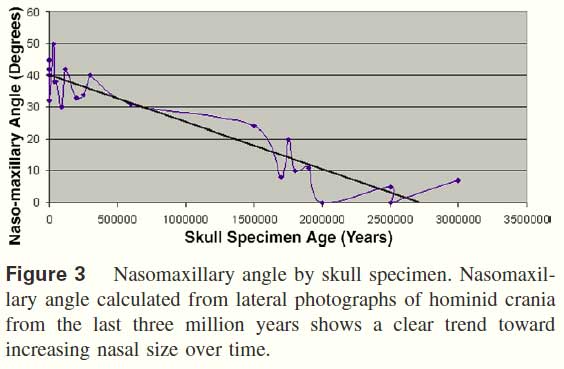 See: ‘The human external nose and its evolutionary role in the prevention of obstructive sleep apnea’ in: Otolaryngol Head Neck Surg June 2010 vol. 142 no. 6 779-782.

Question [optional]: Do people with abnormally large noses tend to snore more, less, or the same amount as those with ‘normal’ sized noses?