“It helps to imagine under what conditions a man would be swimming at, say, the same Reynolds number as his own sperm. Well you put him in a swimming pool that is full of molasses, and the you forbid him to move any pare of his body faster than 1 cm/min. Now imagine yourself in that condition; you’re under the swimming pool in molasses, and now you can only move like the hands of a clock. If under those ground rules you are able to move a few meters in a couple of weeks, you may qualify as a low Reynolds number swimmer….” 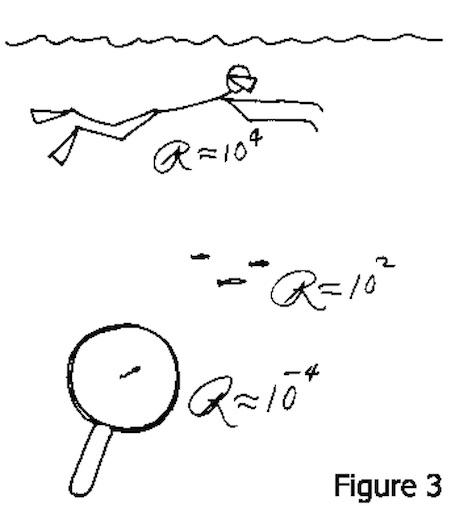 “I come back for a moment to Osborne Reynolds. That was a very great man. He was a professor of engineering, actually. He was the one who not only invented Reynolds number, but he was also the one who showed what turbulence amounts to and that there is an instability in flow, and all that. He is also the one who solved the problem for how you lubricate a bearing, which is a very subtle problem that I recommend to anyone who hasn’t looked into it. But I discovered just recently in reading in his collected works that toward the end of his life, in 1903, he published a very long paper on the details of the sub mechanical universe , and he had a complete theory which involved small particles of diameter 10^{-18} cm. It gets very nutty from there on. It’s a mechanical model, the particles interact with one another and fill all space. But I thought that, incongruous as it may have seemed to put this kind of stuff in between our studies of the sub mechanical universe today.”