The recent experiment by Joel Berger and colleagues, to test how muskoxen react to humans disguised as polar bears, was inspired by the Ig Nobel Prize-winning experiment done by two Norwegian scientists. This brief video shows the new experiment:

The 2014 Ig Nobel Prize for arctic science was awarded to Eigil Reimers and Sindre Eftestøl, for testing how reindeer react to seeing humans who are disguised as polar bears. That research is documented in the study “Response Behaviors of Svalbard Reindeer towards Humans and Humans Disguised as Polar Bears on Edgeøya,” Eigil Reimers and Sindre Eftestøl, Arctic, Antarctic, and Alpine Research, vol. 44, no. 4, 2012, pp. 483-9.

The Wildlife Conservation Society issued a press release about the new experiment:

Expedition members brought back stunning photos and video taken during this expedition, including a charge of the scientists by a muskox. Berger approached a herd of 40 muskoxen dressed alternately as a polar bear and as a caribou, to gauge responses to species the animals may increasingly encounter due to climate change.

Mary Beth Griggs writes about the new experiment, in Popular Science, with this photo of the human in the polar bear suit: 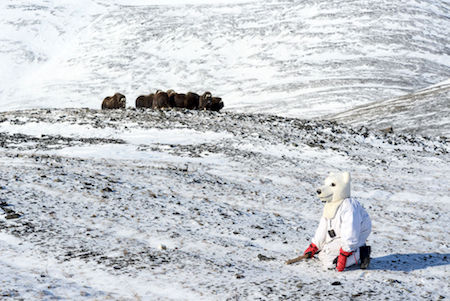 Jacqueline Ronson, too, writes about the new experiment, in Inverse: “This Scientist Donned a Polar Bear Suit to Chase Muskoxen Around the Arctic.” It features this photo of a human in a caribou costume, acting as a control — something to provoke (or not) the muskoxen by way of comparison with the provocation of the human in the polar bear costume: 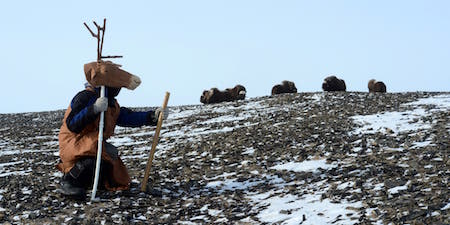