Mark A Jobling [pictured here] of the University of Leicester writes about the genetic underpinnings of exotic meats. His essay, called “Flogging a dead horse“, appears in the journal Investigative Genetics [2013, 4:5]: 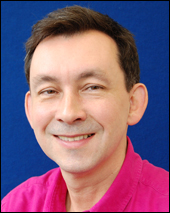 People eat mules, as well as donkeys and horses, and in meat contamination testing, mule meat would appear to be horsemeat, because of the maternal inheritance of mtDNA.

Horses have 64 chromosomes, and donkeys 62, so mules and hinnies carry the intermediate odd number 63, which leads to infertility in the hybrids because oocytes fail during meiosis. As Thomas Bewick writes in his A General History of Quadrupeds, ‘Nature has providently stopped the further propagation of these heterogeneous productions, to preserve, uncontaminated, the form of each animal; without which, …every creature, losing its original perfection, would rapidly degenerate’. Occasionally, though, a female mule produces a foal after mating with a male donkey; so rare is this event that the Romans used the phrase Cum mula peperit (when a mule gives birth), equivalent to the English ‘once in a blue moon’. One such product, a healthy female in China who could plough a field by herself at 4 years of age, had 62 chromosomes, a mix of horse and donkey with a bias towards the latter [8].

In the global market-place of the internet, obtaining novel and exotic animal food products is becoming ever easier, and if you have a strong stomach and wonder how broad the scope is, just visit http://www.exoticmeatmarkets.com, where you’ll find pretty much everything (except horse…). But are these things really what they say? Contributors to Meat Science, take note – there is work for you to do!