Long long ago, you might have heard the story of ATU 333 – though you’ll probably know it by its more usual title: ‘Little Red Riding Hood’. And later, you might have wondered (as some have) about its phylogeny – or even its ‘Phylomemetics’.

In which case, Dr Jamie Tehrani who is a Senior Lecturer in the Department of Anthropology, Durham University, UK, may have answers for you. He makes use of ‘Credibility Trees’ to trace stories back to their original archetypes. This one, for example: 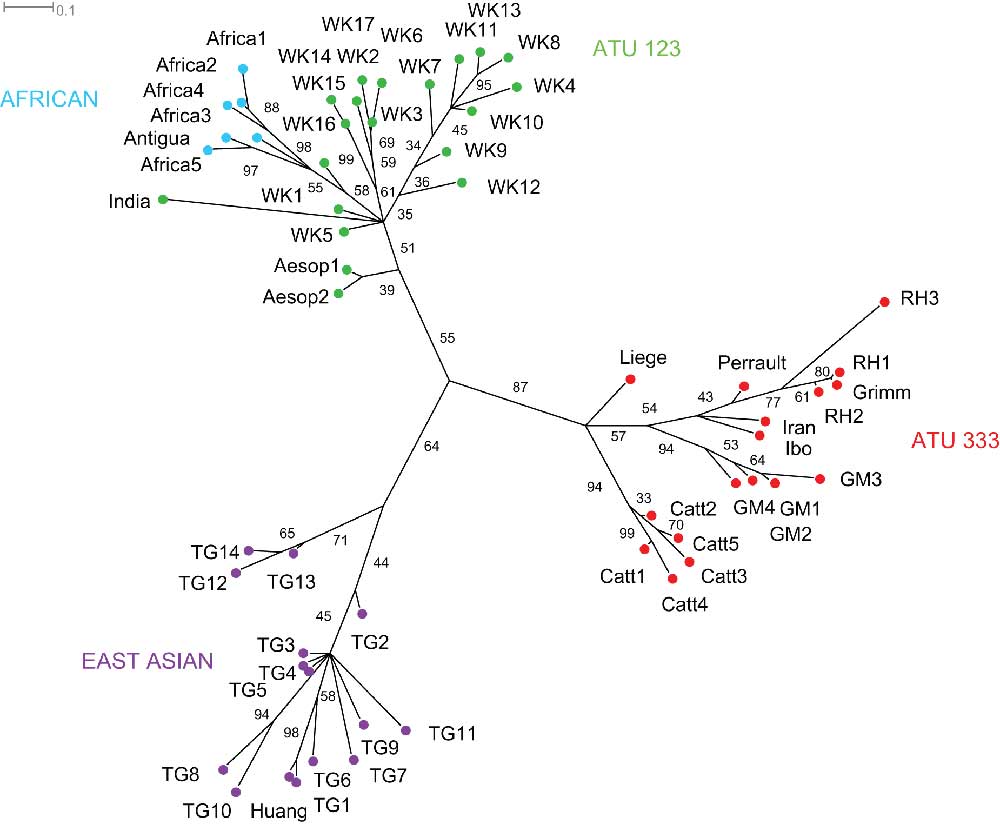 “ […] shows an unrooted maximum clade credibility tree obtained from the posterior distribution. It represents the same three major groupings, with varying levels of support in the posterior distribution of trees. The ATU 333 group is again the most strongly supported, being present in 87% of the tree sample. Tales within this group cluster into the same recognised sub-types of ATU 333 that were returned in the cladistic analysis, including Catterinella (with posterior support of 94%), The Story of Grandmother (94%) and Little Red Riding Hood (54%), with the Liège tale forming a separate branch. Compared to the ATU 333 group, support for the ATU 123 group is relatively modest at 55%. Relationships within the group separate variants of the Aesopic fable from the other narratives. The latter clade (51% posterior probability) includes European and Middle Eastern variants of The Wolf and the Kids, the Indian tale of the Sparrow and the Crow, and a clade comprising the African tales (55% posterior probability). The final major grouping consists of the East Asian tales, which has a posterior probability of 64%. Relationships within this group generally lack resolution, except for one clade that clusters two tales from Korea (TG12 and TG13) with one from Myanmar (TG14) (71% posterior probability).”