“However, the apparent lack of Belarusian capacity to influence the process, deteriorating relations with the West after the presidential elections in December 2010, the economic crisis of 2011 and Lukashenka’s receipt of the parody Ig Peace Nobel Prize in 2013 definitely cooled the president’s ambitions.”

That 2013 Ig Nobel Peace Prize was awarded to Alexander Lukashenko, president of Belarus, for making it illegal to applaud in public, AND to the Belarus State Police, for arresting a one-armed man for applauding.

Here is an official Presidential photo of President Lukashenko, fastened to a mustache, and surrounded by admirers: 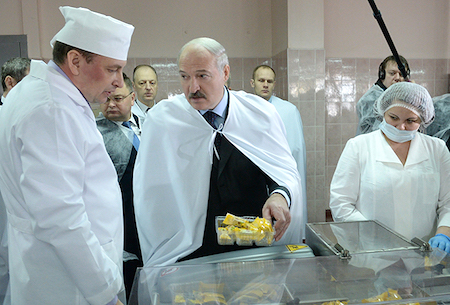