“There is an ever increasing market for surgical repair of gauged ears.” informs an article in The American Journal of Cosmetic Surgery Vol. 32, No. 4, 2015. If you haven’t come across the concept of ‘gauged ears’ before, the authors provide a short explanation and historical context:

“Ear gauging, also known as ‘ear plugging’, can be seen worldwide throughout history. Ear gauging has been employed for eons and has been found in the mummies and relics of ancient civilizations. Gautama Buddha, the founder of Buddhism in Eastern India circa 500 bc, had stretched earlobes. Stretched lobes were noted in Otzi the Iceman, Europe’s oldest known natural human mummy, who lived around 3300 bc. In Egypt, the golden death mask of King Tutankhamen features stretched ears with holes of 10-mm diameter.” 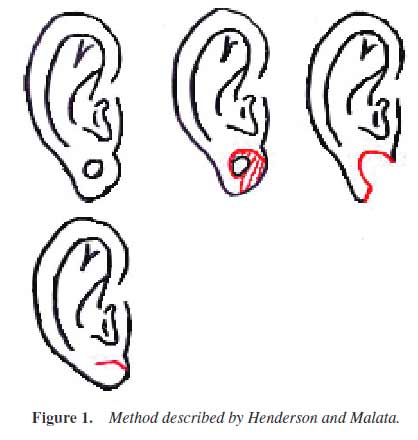 Nowadays however, those who are in possession of ears which have been gauged, and are thinking of “entering the job market for professional employment” might consider having them surgically de-gauged. The article goes on to describe suitable techniques [as at right], and introduces a new one – called The Star Technique.

Note: With graphic photos which those of a squeamish disposition may prefer not to see.

The Gauged Earlobe: A Review of Current Treatment Methods and Presentation of a New Technique