“The immense forehead of sperm whales is possibly the largest, and one of the strangest, anatomical structures in the animal kingdom.“

Leading to the question: ‘What’s it for?’ Herman Melville’s famous novel Moby-Dick suggested that one purpose might be for large-scale head-butting, the practicalities of which are reviewed in a new paper for PeerJ PrePrints, entitled :‘Architecture of the sperm whale forehead facilitates ramming combat’ The authors note, regarding the forehead, that :

“It contains two large oil-filled compartments, known as the ‘spermaceti organ’ and ‘junk’, that constitute up to one-quarter of body mass and extend one-third of the total length of the whale.” [see illustration] 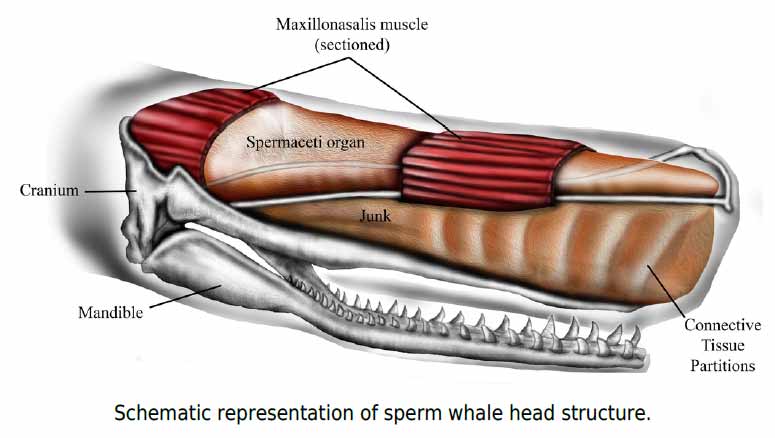 Perhaps, they reason, ‘the junk’ might serve as a kind of macro shock-absorber. And so, to examine their battering-ram hypothesis, they performed Finite Element Analysis (FEA) on a junk-equipped computer model whale head.

“We explore the aggressive ramming hypothesis using a novel combination of structural engineering principles and probabilistic simulation to determine if the unique structure of the junk significantly reduces stress in the skull during quasi-static impact. Our analyses indicate that the connective tissue partitions within the junk reduce stress across the skull during impact; stress reduction is greatest in the anterior aspect of the skull; and removal of the connective tissue partitions increases stress concentrations on the tip of the skull, possibly making it prone to fracture. Although the unique structure of the junk certainly serves multiple functions, our results are consistent with the hypothesis that the structure also evolved to function as a massive battering ram during male-male competition.”