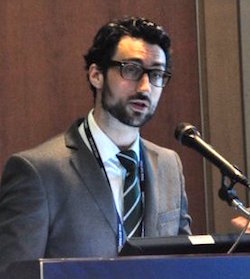 Theodore Cosco [pictured here], who is a past president of the Cambridge University Clay Pigeon Shooting Club, and James Harmsworth King display their unusual across-the-sea foot fetish, in this study:

“Americans shooting themselves in the foot: the epidemiology of podiatric self-inflicted gunshot wounds in the United States,” Theodore D. Cosco and James H. King, Medical Journal of Australia, 2015; 203 (11): 458-461. The authors, at the University of Cambridge, UK, report:

Results: Of the 69 111 reported firearm-related injuries, 667 (1.0%) were self-inflicted gunshot wounds to the foot. Of these, 597 of the patients (89.6%) were men and 51.7% (345) were aged between 15 and 34 years…. Those who shot themselves in the foot were significantly more likely than individuals with other firearm-related injuries to be male (odds ratio [OR], 1.28) and married (OR, 2.6). As the festive season approached, the number of incidents increased; November and December were peak months for shooting oneself in the foot.