Murder aforethought be described in this study, which focuses on a particular kind of cereal killer—one that strikes from within:

“Progress in understanding programmed cell death (PCD) in the cereal aleurone is described. Cereal aleurone cells are specialized endosperm cells that function to synthesize and secrete hydrolytic enzymes that break down reserves in the starchy endosperm. Unlike the cells of the starchy endosperm, aleurone cells are viable in mature grain but undergo PCD when germination is triggered or when isolated aleurone layers or protoplasts are incubated in gibberellic acid (GA). 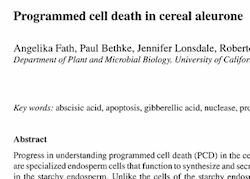 Abscisic acid (ABA) slows down the process of aleurone cell death and isolated aleurone protoplasts can be kept alive in media containing ABA for up to 6 months. Cell death in barley aleurone occurs only after cells become highly vacuolated and is manifested in an abrupt loss of plasma membrane integrity. Aleurone cell death does not follow the apoptotic pathway found in many animal cells. The hallmarks of apoptosis, including internucleosomal DNA cleavage, plasma membrane and nuclear blebbing and formation of apoptotic bodies, are not observed in dying aleurone cells. PCD in barley aleurone cells is accompanied by the accumulation of a spectrum of nuclease and protease activities and the loss of organelles as a result of cellular autolysis.”