Pigeons may be as good as some bad radiologists, in some ways, maybe, suggests this new study:

“Pigeons (Columba livia) as Trainable Observers of Pathology and Radiology Breast Cancer Images,” Richard M. Levenson, Elizabeth A. Krupinski, Victor M. Navarro, and Edward A. Wasserman, PLoS ONE, 10(11): e0141357. (Thanks to Ig Nobel Prize winner Elizabeth Oberzaucher for bringing this to our attention.) The authors, at University of California Davis, the University of Iowa, and Emory University, report: 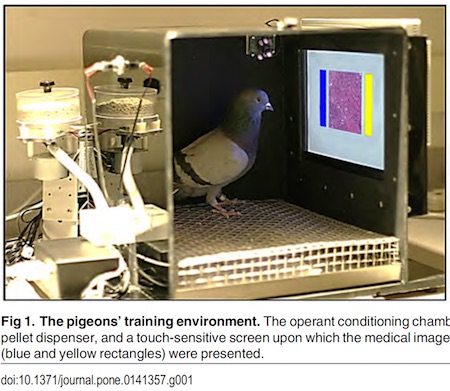 “We report here that pigeons (Columba livia)—which share many visual system properties with humans—can serve as promising surrogate observers of medical images, a capability not previously documented. The birds proved to have a remarkable ability to distinguish benign from malignant human breast histopathology after training with differential food reinforcement; even more importantly, the pigeons were able to generalize what they had learned when confronted with novel image sets. The birds’ histological accuracy, like that of humans, was modestly affected by the presence or absence of color as well as by degrees of image compression, but these impacts could be ameliorated with further training. Turning to radiology, the birds proved to be similarly capable of detecting cancer-relevant microcalcifications on mammogram images. However, when given a different (and for humans quite difficult) task—namely, classification of suspicious mammographic densities (masses)—the pigeons proved to be capable only of image memorization and were unable to successfully generalize when shown novel examples.”

BONUS: The 1995 Ig Nobel Prize for psychology was awarded to Shigeru Watanabe, Junko Sakamoto, and Masumi Wakita, of Keio University, for their success in training pigeons to discriminate between the paintings of Picasso and those of Monet. [details of that research are in the study “Pigeons’ Discrimination of Paintings by Monet and Picasso,” Journal of the Experimental Analysis of Behavior, vol. 63, 1995, pp. 165-174.]

UPDATE (thanks to Tom Levenson): Video that accompanies the study:

BONUS: Kinect and pigeon behavior, with another look at the video of B.F. Skinner explaining how he trains pigeons: