Twenty-six co-winners of the 2009 Ig Nobel economics prize have been sentenced to prison, with perhaps more on the way, according to an October 14, 2015 report in Iceland Magazine: 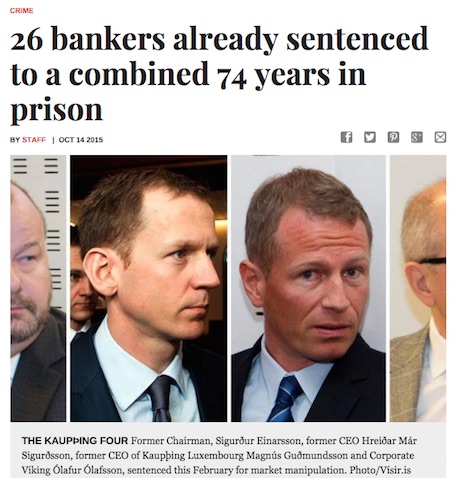 In two separate rulings last week, the Supreme Court of Iceland and the Reykjavík District Court sentenced three top managers of Landsbankinn and two top managers of Kaupþing, along with one prominent investor, to prison for crimes committed in the lead-up to the financial collapse of 2008. With these rulings the number of bankers and financiers who have been sentenced to prison for crimes relating to the financial collapse has reached 26, and a combined prison time of 74 years….

The 2009 Ig Nobel Prize for economics was awarded to the directors, executives, and auditors of four Icelandic banks — Kaupthing Bank, Landsbanki, Glitnir Bank, and Central Bank of Iceland — for demonstrating that tiny banks can be rapidly transformed into huge banks, and vice versa — and for demonstrating that similar things can be done to an entire national economy. (REFERENCE: Report of the Special Investigation Commission, issued April 12, 2010.)

UPDATE (October 31, 2015): “Iceland is Doing Much More than Just Urinating on Its Criminal Bankers“