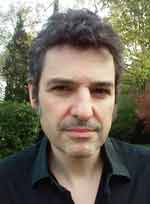 ‘A two-eyed ‘monster’ made of meatballs and noodles performs as godhead, with supernatural powers. It is represented floating in the air, overlooking its creation, humanity, on which it is all powerful: it can elicit faith, or destroy it. The revelation was received by a certain ‘Captain Mosey’, chief pirate, who was the first prophet of the Church.

The CFSM then grew towards institutionalization, through a series of faith articles and normative rules which prove the monster’s existence, and eight commandments, that are almost indistinguishable from the Old Testament’s prescriptions. A revelation creed is uttered by those who have been ‘touched’ by the monster’s ‘noodly appendage’. CFSM members also celebrate religious festivals, simply named ‘holidays’, which take place around Christmas time, and which call upon no other obligation than celebrating.”

Is this the Flying Spaghetti Monster? Siphonophore filmed on seabed off the coast of Angola (The Independent, Aug. 2015)