In these days of intensified focus on accurate biometrics, the question may be asked: ‘Is it possible to ID an individual by their armpit odour – even if they use deodorant?’ 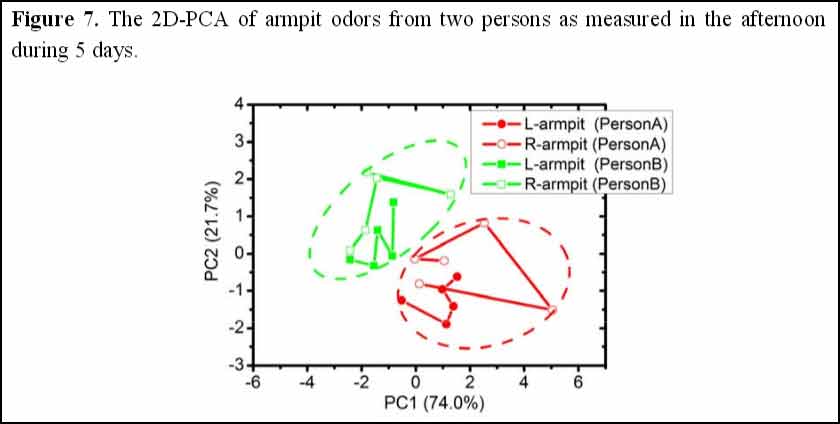 Researchers Chatchawal Wongchoosuk, Mario Lutz and Teerakiat Kerdcharoen from Mahidol University, Bangkok, have made preliminary progress in this field. Their paper ‘Detection and Classification of Human Body Odor Using an Electronic Nose’ (in: Sensors, vol. 9, pp. 7234-7249) recounts the development of their E-nose which features enhanced humidity correction.

“Armpit odors of two volunteer persons were measured by an E-nose during five days using a combined hardware/software humidity correction.“

“During the experiment period, the volunteers were requested to go about their ordinary life and activities: for example, they took a shower twice a day (before going to bed and after waking up following the morning sample collection). To avoid fluctuation in odor samples, they were not allowed to have sex and/or consume alcohol. To study the effects from deodorant, the volunteers were requested to use deodorant, after taking shower in the morning, but only on the right arm.”

The results, for those who wish to open the door to the field of human body odor biometrics, were promising :

“The E-nose in conjunction with PCA [principle component analysis] method was shown to differentiate the body odors of two persons with similar life style and activities. In addition, we have found that deodorant does not effect the relative identification of these two persons. In order to extend the discrimination of human body odors beyond two persons, a number of improvements are required such as increasing sensor types that response to a variety of volatile molecules. It is hoped that the preliminary results presented in this paper will open the door to the field of human body odor biometrics.”