According to a recent scientific study, we’re better at lying when we are also controlling our bladders.

The following expert from the paper’s abstract provides a good summary of the authors’ findings:

Deceiving requires increased access to inhibitory control. We hypothesized that inducing liars to control urination urgency (physical inhibition) would facilitate control during deceptive interviews (cognitive inhibition). Participants drank small (low-control) or large (high-control) amounts of water. Next, they lied or told the truth to an interviewer. Third-party observers assessed the presence of behavioral cues and made true/lie judgments. In the high-control, but not the low-control condition, liars displayed significantly fewer behavioral cues to deception, more behavioral cues signaling truth, and provided longer and more complex accounts than truth-tellers. 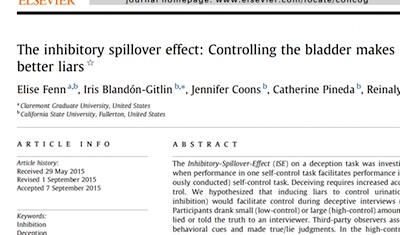 (Thanks to investigator Karen Kustedjo for alerting us to this article.)