Here’s a reported answer to a question only old people — people old enough to know what a “telephone book” is — will understand. Here’s video of the question:

And here, the suggested new answer:

“Many of us are familiar with a classical demonstration of the strength of friction: take two phonebooks, interleave their sheets and try to separate them by pulling on their spines. This demonstration has been carried out spectacularly by attempting to pull the books apart with people, trucks, lifting a car, and even two military tanks, only to fail and suggest that the inner friction between these sheets prevails…

“[We] study the force needed to separate two books as a function of the number of sheets, the thickness of the sheets, and the interleaving distance. In particular, we show that the force required to separate the books increases more than exponentially with the number of sheets. The strength of the system is to be due to the operator: the person, car, truck, or tank, amplifies any small friction arising from the normal force acting on the boundaries of the stack.” 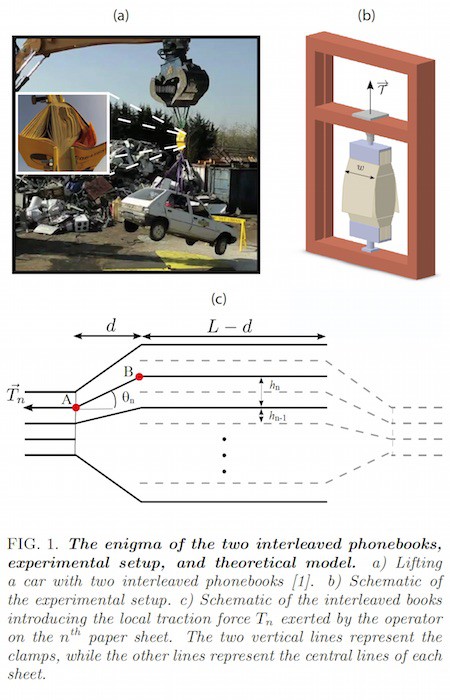 The arXiv blog has a nice writeup of that writeup, with the headline “Physicists Solve the Mystery of Interleaved Phone Books — Try pulling apart two interleaved phone books and you’ll inevitably be defeated by huge frictional forces. Just how these forces arise has been a long-standing mystery… until now.”

Mythbusters had a go at the problem, back in 2009:

(Thanks to Jennifer Ouellette for bringing this to our attention.)