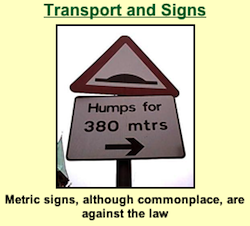 The British Weights and Measures Association (BWMA) exists, it says, “to protect and promote British weights and measures, and to oppose compulsory use of the metric system”.

Their catchy slogan: “campaigning for inch-pound industries and consumer interests”.

They maintain a list of “Corporate Culprits” — people and groups of whom they say:

Just who are the people who would have us all “go metric”? Who do they represent? What are their motives? BWMA reveals some of the answers in this rogues’ gallery of busybodies, bureaucrats, boffins and cowboys.

Among these culprits one finds the UK Metric Association and Lord Taverne [pictured here]:

Lord Taverne is a Patron of the UK Metric Association. He was the minister in charge of decimalisation of the coinage in 1968, and sees metrication as part of the same process.

UPDATE: Investigator Mathew Wasley informs us of the BWMA’s generous campaign, some years ago, to save the litre.