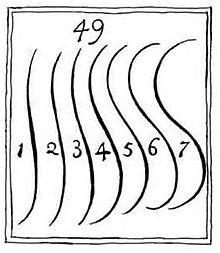 In 1753 (or thereabouts) William Hogarth published his study into ‘The analysis of Beauty’ (“Written with a view of fixing the fluctuating ideas of taste.”) He was particularly interested in the ‘Perfect Curve’. For Hogarth, number 4 hit the spot.

Scroll forward to April 2015 for another study about curves, which asks whether peoples’ apparent preference for curvaceous things could perhaps stem from a dislike of angular things? Perhaps corners are dangerous? The research paper  ‘Do observers like curvature or do they dislike angularity?’ is scheduled for publication in the British Journal of Psychology.

– showing that the mysterious attraction of the curve is probably still worthy of further research.

The authors conclude that:

“Most people prefer curved stimuli to angular stimuli. In our data, this effect was clear in all four experiments, including when lines were presented through an aperture and therefore did not form closed shapes. Moreover, our data suggest that the preference for curvature is not a by-product of a negative response to angularity. We conclude that the curvature effect is likely to be caused by intrinsic characteristics of the stimuli, rather than what they might signal. “

Note: Co-Author Marco Bertamini also looks into holes, both curvy and angular, like the one shown above.