BONUS: US patent 6527616, issued March 4, 2003, for a “Throwing toy for producing splash effect” which “is comprised of a sticky elastomer shell around a liquid core. The shell is comprised of a thermoplastic rubber mixed with a petroleum based oil in a ratio that produces an extremely soft shell. The core is comprised of clarified water. When the toy is thrown against a wall, it greatly flattens to produce a splash effect, sticks to the wall temporarily, slowly reforms into its original shape as it drips down the wall, and falls off the wall.” Here’s further detail from the patent document: 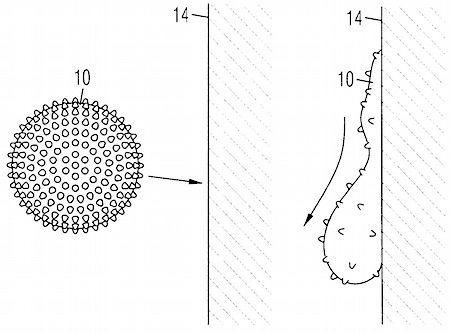