If you’ve ever had difficulty navigating your way around a complex department store, or experienced difficulty with a tricky transfer at a subway station, you may be interested in one of the many cross-modal human/computer research projects [see previous article in this series] which have been developed by the Kajimoto laboratory (a department of The University of Electro-Communications, Tokyo, Japan). See: ‘Pull-Navi: A novel tactile navigation interface by pulling the ears’ 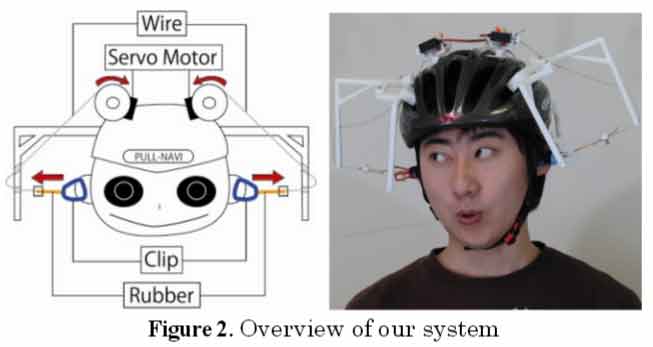 “We propose a new type of navigation interface for walking. Previous works on navigation mainly used visual and acoustic sensation, which is not intuitive. Some other works used tactile stimulation onto the hand or the arm to generate pseudo pulling force. But the device tended to become large and heavy. We propose to use ear, instead of hand and arm to generate the sensation of being pulled. Being pulled the ear for navigation is a common situation when we were children and hence, the sensation should be quite intuitive. At the same time, the amount of necessary force is quite small.”

The lab provides a movie showing the device under development. [mp4 format]

This concludes our partial profile of the work of the Kajimoto laboratory – a page with links and info about more than 50 cross-modal human interface projects (2006 -2013) can be found here.

The lab has also recently implemented a new Youtube channel.