“Undercover Report: Airport Security Misses 95 Percent of Weapons and Explosives” is the headline on a short essay in BigThink. Here’s the kicker:

Christopher Chabris, associate professor of psychology at Union College, explains how airport security officials easily miss the forest for the trees. In 2004 he was the co-recipient of an Ig Nobel Prize for his now-landmark experiment “Gorillas in Our Midst,” which demonstrated that when subjects focused their attention on one thing, they often failed to notice something as conspicuous as a woman in a gorilla suit. 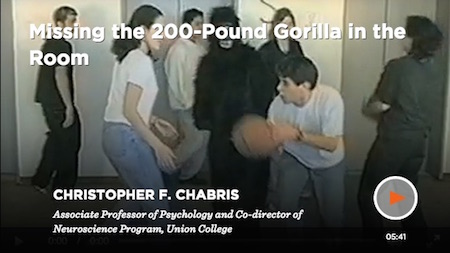