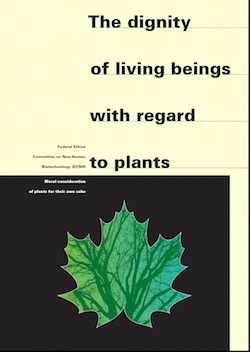 Plants not only have dignity, as enshrined in Swiss law and explained in the pamphlet The Dignity of Living Beings with Regard to Plants. Plants are intelligent, in ways some humans are slow to recognize. That first notion was honored with the an Ig Nobel Peace Prize, the second notion is explored in a new book called Brilliant Green: The Surprising History and Science of Plant Intelligence.

The 2008 Ig Nobel Prize for peace was awarded to The Swiss Federal Ethics Committee on Non-Human Biotechnology (ECNH) and the citizens of Switzerland for adopting the legal principle that plants have dignity.

The book Brilliant Green is written by Stefano Mancuso [profiled in the video, below], a plant behaviorist, and Alessandra Viola [pictured here], a science journalist.

Here’s part of an interview with Mancuso, by Lindsay Abrams, in Salon: 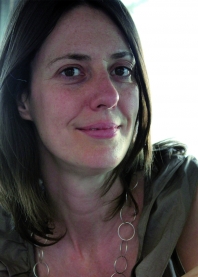 there things that you’re still trying to prove or haven’t been able to figure out? Can you be sure whether there’s really intention there?

Today in my lab, we are studying in two different, let’s say parallel, ways. One is the social relationship among plants. I think that would be incredibly interesting to try to explain how plants behave differently according to their neighbors. If the neighbors are relatives, there is a kind of behavior. If they are strangers, there is a completely new, completely different behavior. This is something that we are trying to find, how the plants are able to recognize the plants around them and how they can change their behavior accordingly. 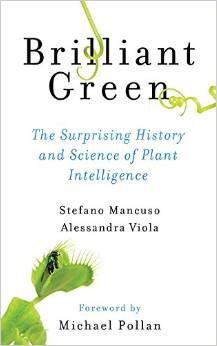 The second point is memory and learning. This is the most important and the most fascinating. At the beginning of the past year, we published a paper where we were able to demonstrate that the plants were able to learn — for example, that a specific stimulus was not dangerous. They were able also to learn not to react, not to spend energy responding to a non-dangerous stimulus. What was incredibly surprising for us was that we left plants completely undisturbed for almost two months; at the end of the second month, the plants were all the time remembering that a specific stimulus was not dangerous. What we learned from that experiment was that plants had a memory. We don’t know how they can memorize, because they have no brain. There should be another, completely new system to store information that could be incredibly interesting to find out. The other thing we want to find out is how long this kind of memory is. Two months is a lot. Just to give you an example, in insects, the average length of the memory of information is 24 hours.