…Typically, doctors would next resort to sealing off the nearby artery. But in this case, doing so could have left the child blind.

Running out of options, Humphreys dug into the medical literature. That’s when he stumbled upon the idea of using salt pork. Evidently, infantrymen during World War I put pork on their wounds to control bleeding until they could find medical care.

Robert Jackler, chair of Stanford’s otolaryngology, head and neck surgery department, said he’s found references to its use against nosebleeds in materials dating back to the 1800s.

“God knows who figured this out,” he said. But it worked.

After a brief discussion, Humphreys and his team decided to try it before resorting to a more dangerous procedure. They crafted two porcine plugs and inserted them into the girl’s nose. To everyone’s relief, the bleeding stopped. When she returned a month later with another nosebleed, the doctors knew just what to do.

Even now, doctors aren’t sure how the pork works. Wanting to spur further research on the subject, Humphreys’s team published a paper about the episode.

For their ingenuity, the group received the 2014 Ig Nobel Prize in Medicine…

Here is a detail from the Ig Nobel Prize-winning medical paper by Ian Humphries and his colleagues: 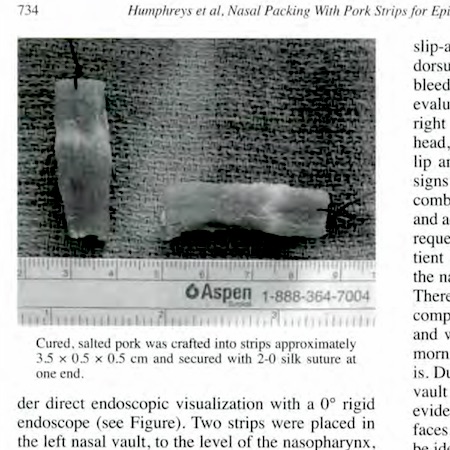