Darrin Pagnac, of the Museum of Geology at the South Dakota School of Mines and Technology, teache sthe course GEOL 372, Dinosaurs, every spring. He writes (in the Transforming Time Into Space blog):

The course is geared toward sophomore majors and upper-level non-majors.  I specifically keep it light and utilize it less to instruct the intricacies of paleontology and more as a tool to instill skepticism and critical thinking skills.  It’s a very popular course and, most likely because of the content, I generally get very good teaching reviews. After the systematics portion of the course where I outline the various types of dinosaurs, the exam includes the question, “What is your favorite dinosaur and why?”  I’ve been tabulating the answers for five years and the results are intriguing. 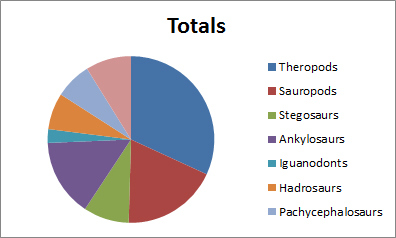 Above is a pie chart of the total percentage of answers to this question.  I find it interesting that there is a 50/50 split between Saurischia (theropods and sauropods) and Ornithischia (all other groups).  In terms of totals, theropods are the clear leader for obvious reasons; they have sharp teeth, claws, are fast, agile, and awe inspiring.  I do take note of subdivisions of theropods as well, and, as expected, “raptors” are generally the front-runner with Tyrannosaurus a close second.

The next most common favorite is sauropods, but for completely different reasons.  Students who like sauropods are drawn to their ubiquitous nature.  Sauropods seem to be the “go-to”, iconic dinosaur and are found everywhere from old cartoons, to gas station signs, to displays in major airport terminals, to cheesy tourist traps.  Sauropods have been these students’ favorites since childhood

Ornithischians are a more mixed lot.  Because ornithischians contain six groupings as opposed to saurischia’s two, simple statistics dictate that responses to these groups will be more dilute, and this is indeed the case.  Below is a bar chart illustrating the breakdown of favorite dinosaur group by year, as well as the totals.  As you can see, it varies a great deal by year which ornithischian group comes out on top. 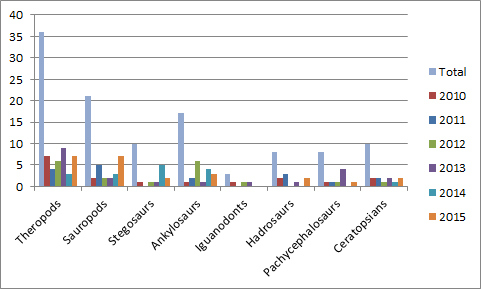 Ankylosaurs are the leader for favorite ornithischian group due to their distinctive appearance and “weaponry”.  The same attraction draws students to ceratopsians and stegosaurs; horns and spikes apparently appeal to repressed blood-lust.  Pachycephalosaurs appeal for similar reasons.  Despite the fact that my pachycephalosaur lecture is devoted to debunking the head-butting myth, students still seem to relish the idea of dinosaurs running full-tilt into each other’s thickened crania.  Finally, the students who are drawn to hadrosaurs generally hearken back to a favorite childhood movie or cartoon.  Iguanodonts get no love, which is too bad.  How can you hate a dinosaur that’s constantly giving you the “thumbs-up”?

I constantly refer to paleontology as the “gateway drug to science”.  Paleontology is a fantastic tool for STEM education and for fostering curiosity and passion for science.  Dinosaurs work gloriously in this capacity as they provide an approachable way to illustrate scientific concepts and critical thinking applications.  After I’ve destroyed childhood viewpoints with my pachycephalosaur lecture, I often find many students openly angry at the idea that no head-butting likely occurred.  When I ask them why they are so angry, they generally state in some way that they’ve become emotionally attached to this imagery or idea.  I then tell them to think about this next time they hear a debate about climate change, or creationism, or anti-vaccination, or GMOs, or any politically heated argument.  It’s difficult to change your mind about something you’re emotionally invested in.  I encourage them to keep an open mind.

Sixty-five million years later, dinosaurs can still have a lasting and positive effect on the world…