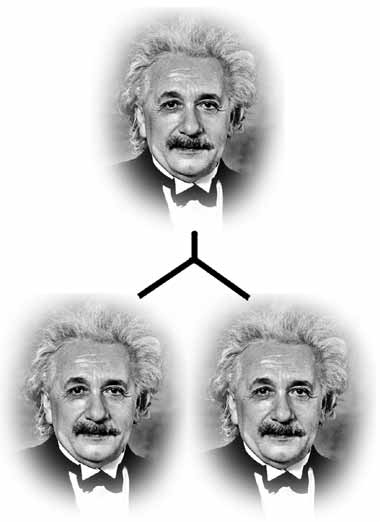 Nobel prize-winning physicist Albert Einstein was of course deeply interested in (and concerned with) the implications of splitting the atom, viz. nuclear fission. Philosophers on the other hand, not only consider such things, but can also go on to wonder : What about splitting Albert himself? Such a scenario is examined by Dr. Wolfgang Schwarz of the Australian National University, who ponders a fissionable Einstein in a recent paper for the journal Mind (October 2014). First he sets the scene with a comparatively straightforward illustration : a train. Specifically one which runs from Berlin to Düsseldorf and Cologne. It reaches a station called Hamm, where it divides in two (one half going on to Düsseldorf the other to Cologne). Should it be called the Düsseldorf train or the Cologne train?

“What if Einstein had undergone fission or fusion? Suppose Einstein fissioned into two people in 1955. There are then three candidates for the reference of ‘Einstein’: the Y-shaped object that was a person before the fission, and the two branches that were persons after the fission. Which of these does the name pick out? I suppose it would be the Y-shaped object, although we might of course also have a name for one of the branches.”

See: ‘Counterpart theory and the paradox of occasional identity’ Mind (2014) 123 (492): A penultimate draft of which can be read in full here.