Dr. NakaMats, possibly the greatest man in the world, who is about to make his grand farewell appearances in the UK, Denmark and Sweden, granted an interview to Jack Preston of Virgin Entrepreneur.

Dr. NakaMats was awarded the 2005 Ig Nobel Prize for nutrition, for photographing and retrospectively analyzing every meal he has consumed during a period of 34 [now, in 2015, 44] years (and counting). In March, in the company of several other Ig Nobel Prize winners, he will be the star of stars on the Ig Nobel tour of Europe [click here for the tour schedule], sharing his ideas with audiences, and gathering acclaim, in London, Aarhus, Copenhagen, and Stockholm.

Here are excerpts from the Virgin Entrepreneur interview:

Yoshiro Nakamatsu, or Dr NakaMats as he is more widely known, is one of the world’s leading inventors with over 3,500 patents to his name. We sat down with the cult hero to find out how we can all come up with better ideas.

It’s not easy to forget Dr NakaMats’ most famous invention, the Floppy Disk, with the entrance to his Tokyo residence set inside a door-sized replica of the idea which he claims to have come up with in 1952, before later licensing it to IBM in the late 1970s. Since then he has worked tirelessly to cement his positon as one of the world’s most prolific inventors, with his list of patents including a self-defence wig, a cigarette for activating the brain, jumping shoes, the ‘Enerex System’ for generating hydrogen and oxygen along with a condom that comes with an embedded magnate for “improving sensitivity in the female organs”.

With a lifetime of weird and wonderful inventions behind him Dr NakaMats is now facing his biggest challenge to date, having recently being diagnosed with prostate cancer…. 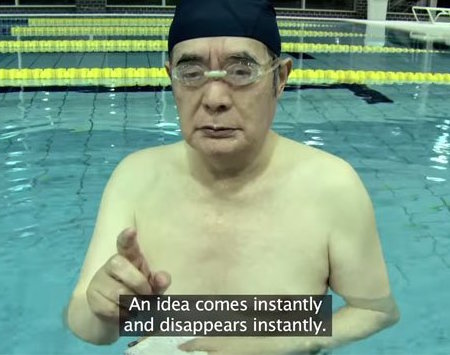 …To help with the recording of ideas during this time, Dr NakaMats has even invented waterproof paper and pencils, claiming “an idea comes instantly and disappears instantly”.

By getting as close to death as possible, Dr NakaMats believes we will have our greatest ideas. Let us hope that his theory is proven to be correct as he continues his mission to find his most important invention to date.

BONUS: The documentary film “The Invention of Dr. Nakamats“:

The director, Kaspar Schroeder, is now filming a second documentary. Parts of what happens on our March 2015 tour of Denmark will be in that documentary.

BONUS: The music group Full Metal Breakfast released their song about Dr. Nakamats. You can listen to it online.