Many people spontaneously use the word (or sound) “Um” in conversation, a phenomenon which has prompted a considerable volume of academic attention (some of which we discussed recently). A question arises though, can someone be induced to say “Um” by chemical means – say with the use of a powerful anaesthetic? Like, for example Ketamine? [Note: Ketamine is often used as a veterinary tranquilliser, and as an illicit recreational drug under monikers like ‘Special K’ and ‘Cat Valium’] 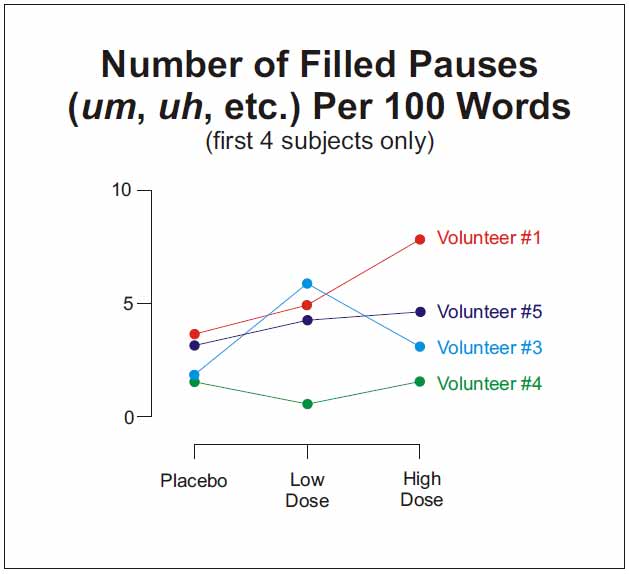 The department of Computer Analysis of Speech for Psychological Research (caspr) at The University of Georgia, US, (where it’s said that “Language is a window into the brain”) have examined just such a scenario. Researchers Congzhou He, Michael A. Covington, James Semple and John Brown have looked through the the brain’s window to examine the effects of Ketamine on speech. A poster, presented at the International Congress on Schizophrenia Research, Savannah, April 2005, and entitled : ‘Some linguistic signs of ketamine-induced cognitive impairment‘ describes research (conducted at the University of Cambridge, UK) in which experimental volunteers who were given “low doses” and “high doses” of Ketamine tended to use the words “um” and “uh” significantly more than those who received a placebo only. More “ums” and “uhs” were especially apparent with the high doses. The subjects also had difficulties with verbs and nouns.

[1] Authors James Semple and John Brown were representing the pharmaceutical manufacturer GlaxoSmithKline which ‘supported’ the study.

[2] The “high dose” (0.27 mg/kg) was significantly less than the usual ‘anaesthetic dose’ (1 – 4.5 mg/kg) – presumably it had to be, otherwise the subjects might have had considerable difficulty in saying anything.

[3] Please comment below if you know of any other studies in which substances have been shown to influence the number of “ums” a person produces – e.g. cannabis, Dry Martini, dark bitter-chocolate truffles, etc etc.