Scientists continue to struggle, or at least write, on the question: Is coffee-drinking good or bad for a person’s health?

One scientist found a new way to say — using only 192 words — “It’s complicated”.

That summary appears in the study: “Toward systems epidemiology of coffee and health,” Marilyn C. Cornelis, vol. 26, no. 1, Current Opinions in Lipidology, February 2015, pp. 20-29. The author presents this 192-word abstract:

PURPOSE OF REVIEW: Coffee is one of the most widely consumed beverages in the world and has been associated with many health conditions. This review examines the limitations of the classic epidemiological approach to studies of coffee and health, and describes the progress in systems epidemiology of coffee and its correlated constituent, caffeine. Implications and applications of this growing body of knowledge are also discussed.

RECENT FINDINGS: Population-based metabolomic studies of coffee replicate coffee-metabolite correlations observed in clinical settings but have also identified novel metabolites of coffee response, such as specific sphingomyelin derivatives and acylcarnitines. Genome-wide analyses of self-reported coffee and caffeine intake and serum levels of caffeine support an overwhelming role for caffeine in modulating the coffee consumption behavior. Interindividual variation in the physiological exposure or response to any of the many chemicals present in coffee may alter the persistence and magnitude of their effects. It is thus imperative that future studies of coffee and health account for this variation.

SUMMARY: Systems epidemiological approaches promise to inform causality, parse the constituents of coffee responsible for health effects, and identify the subgroups most likely to benefit from increasing or decreasing coffee consumption.

Professor Cornelis is at Northwestern University and at Harvard University, a duality that is, itself, complicated.

In a recent interview with the Harvard Gazette, about the relationship between coffee and health, Professor Cornelis further simplified her summary. She said: “it’s a little bit complex.” This photo of Professor Cornelis, by Rose Lincoln, accompanies that interview: 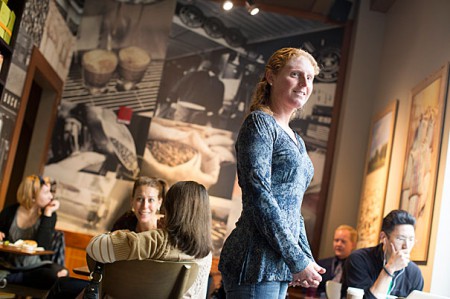