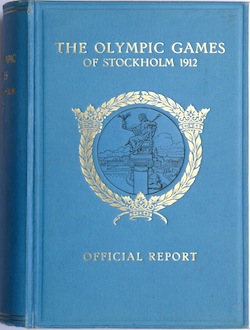 This week’s math/physics essay quiz is to explain the math and physics underlying these “INSTRUCTIONS FOR THE OFFICIALS AND COMPETITORS AT THE SHOOTING COMPETITIONS” from  THE OFFICIAL REPORT OF THE OLYMPIC GAMES OF STOCKHOLM 1912, ISSUED BY THE SWEDISH OLYMPIC COMMITTEE. Here is the relevant passage:

In addition to the rules and regulations already issued, and with ‘which each competitor must be acquainted before the shooting begins, the following rules shall also be in force.

1. The competitor must not be credited with any point at all (= o) for a shot that hits a target belonging to another nation or to any other competitor.

3. If on the target or figure of a competitor there is found, on marking, two or more hits than he has fired shots, the competitor must fire the series again.

(Large) PDF of the entire report.