The TED Blog lists “The 10 weirdest things that have happened in TED Talks“. Two of those “weirdest things” involve Ig Nobel Prize winners.

Kees Moeliker was awarded the 2003 Ig Nobel Prize for biology, for documenting the first scientifically recorded case of homosexual necrophilia in the mallard duck. Here’s what TED Blog says: 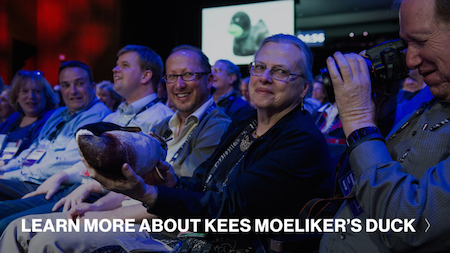 3. The story of a man and his dead duck. Ornithologist Kees Moeliker won the Ig Nobel prize for inspiring future generations of scientists with a strange but serious paper about the mallard’s inclination toward homosexual necrophilia. During his talk at TED2013, Moeliker shared the odd story behind his research… and handed an audience member the stuffed dead duck that inspired it. Before leaving the stage, he politely asked for the duck back, as it is technically a museum specimen.

Bart Knols was awarded the 2006 Ig Nobel Prize for biology, for showing that the female malaria mosquito Anopheles gambiae is attracted equally to the smell of limburger cheese and to the smell of human feet.. Here’s what TED Blog says: 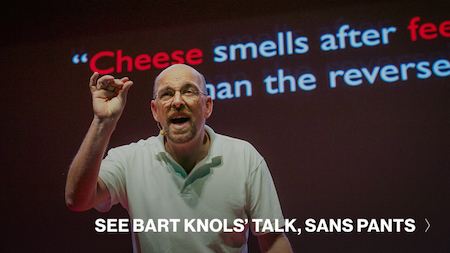 Bart Knols gives his talk… in his underwear. What’s more annoying than a mosquito bugging you while you’re in bed? To remind us of this, malariologist Bart Knols started his TEDx talk from a bed onstage. He emerged from under the covers to share the details of his research on the spread of malaria … aaaand he never stopped to put on pants. Also notable: watching hundreds of mosquitoes feed on his arm in a metal box on stage, at the 8:09 mark.