“A randomised crossover trial of the acute effects of a deep-fried Mars bar or porridge on the cerebral vasculature,” William G. Dunn, and Matthew R. Walters, Scottish Medical Journal, epub 2014.

The authors, at the BHF Glasgow Cardiovascular Research Centre and the University of Glasow, report:

Methods Twenty-four fasted volunteers were randomised to receive a deep-fried Mars bar and then porridge (control), or vice-versa. We used transcranial Doppler ultrasound to calculate Breath Holding Index as a surrogate measure of cerebrovascular reactivity. Change in Breath Holding Index post-ingestion was the primary outcome measure. 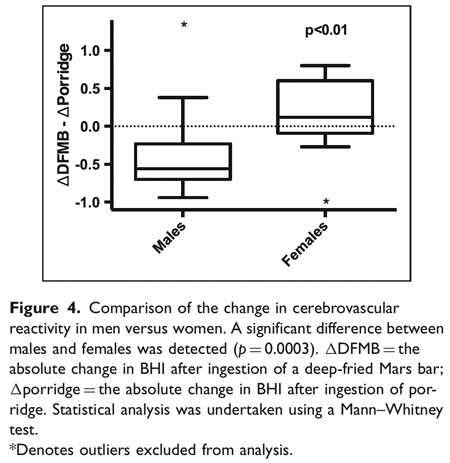 The results led them to devise this conclusion:

(Thanks to investigator Erwin Kompanje for bringing this to our attention.)