In the case of so-called “Himalayan Viagra,” farmers in Tebet are devising their own way to protect a suddenly valuable, scare local crop, suggests this study:

The authors, at Washington University in St. Louis, write:

“Today yartsa gunbu is widely traded as a powerful tonic in Chinese medicine, is often referred to as ‘Himalayan Viagra’ in the media, and has become such an important commodity that scholars nominated it to be China’s national fungus… This paper describes the situation in Nubri and Tsum where yartsa gunbu has been collected by local medical practitioners for centuries, but only became a critical part of people’s household economies within the last decade…. We use Nubri and Tsum as case studies to illustrate how some communities are dealing with a phenomenon that is transforming people’s lives faster than any development scheme could envision.” 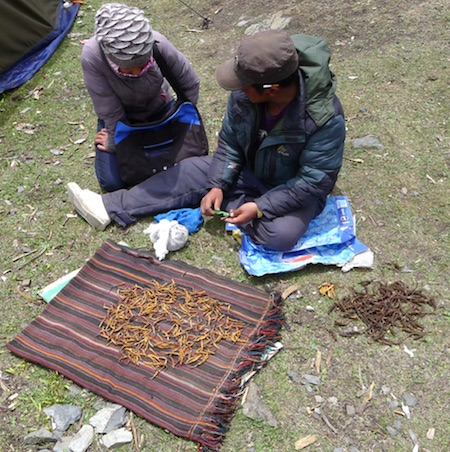 BONUS: Richard Conniff, in the Strange Behaviors blog, has some commentary on the matter.

BONUS: An NPR report from 2011: “Caterpillar Fungus: The Viagra Of The Himalayas“. It says, in part: “Britt Bunyard, a professor at the University of Wisconsin and editor of Fungi Magazine, explains that this fungi (Cordyceps Sinensis) makes its living by getting inside a host insect and ultimately killing and consuming it. In this case, the insect that’s invaded is the caterpillar of the ghost moth.”