The scholarly journal called Social Text has again published a paper that may seem to be a jumble of big words but may, conceivably be full of deep, clear, important meaning. 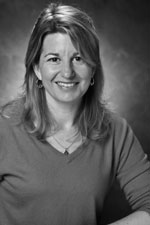 “S’More Inequality — The Neoliberal Marshmallow and the Corporate Reform of Education,” Bethany Moreton [pictured here], Social Text, 2014, Volume 32, Number 3 120: 29-48. (Thanks to investigator Rose Fox for bringing this to our attention.) The author, at the University of Georgia, explains:

“Cognitive psychology—’the mind’s new science’ of the last several decades—has directed both popular and scholarly attention to the cultivation of individual willpower as a tool of personal maximization. The Stanford marshmallow experiment on delayed gratification among preschoolers serves as a widely recognized touchstone for this revivification of interest in the will. But the marshmallow test is more than a handy synecdoche for the cold new logic behind shrinking public services and the burgeoning apparatus of surveillance and accountability. It also shows how the sciences of the soul can be deployed to create the person they purport to describe, by willing political transformation. The individual agent of willpower—’executive function,’in the argot of the cognitive sciences—becomes both the means and the end of school privatization. This body of work offers a way to read savage social inequality and a bifurcated labor market as individual mental functions whose ideal type is corporate decision making; it also aids the transition to corporate control of education itself. Following this trope from the realm of cultural logic to public policy allows us to watch neoliberalism operating simultaneously as ideology and agenda and to recognize the consistent denial of reproductive labor that gives the lie to its pretensions.”

This same journal, Social Text, published a paper in 1996 that was honored with the  that year’s Ig Nobel Prize for literature. That prize was awarded to the editors of the journal Social Text, for eagerly publishing research that they could not understand, that the author said was meaningless, and which claimed that reality does not exist. [REFERENCE: The paper was “Transgressing the Boundaries: Toward a Transformative Hermeneutics of Quantum Gravity,” Alan Sokal, Social Text, Spring/Summer 1996, pp. 217-252.]