The years bring ever more numerous intriguing, clever press reports and editorials about the Ig Nobel Prize ceremony and the new winners. We’re collecting links to a few of the new ones, on our PRESS CLIPS page.

The Associated Press report include a generous helping of delicious photos, among them Charles Krupa’s instant-classic (it’s appeared on almost countless news and other sites worldwide) photo of the nasal-pork demonstration. 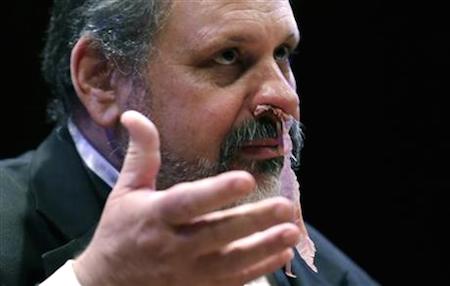 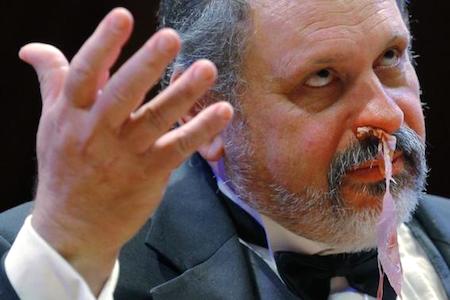 If you know of other especially whatever news reports that we should add to our PRESS CLIPS list, we’d love to hear from you. Please send the URL(s), of course.

The extensive British and Japanese print, radio, and TV reports are always a treat to see. The Stockholm newspaper Dagens Nyheter always has an especially entertaining and informative account: 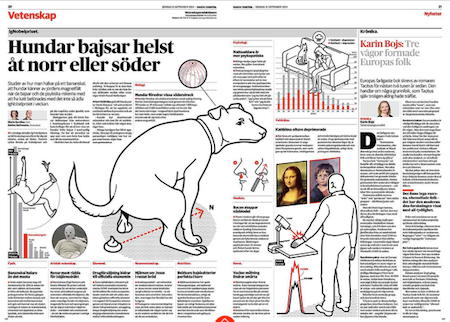 The Ig has always been cheerfully chuckled over in Sweden. Sweden’s TV4’s report this year includes an interview with Hakan Westerberg, Swedish co-winner of the 2004 Ig Nobel Prize for biology, which honored a surprising discovery about herring.)

Googling will turn up many of the other British (occupying pretty much the entire spectrum from the Guardian and The Times to The Daily Mail), Japanese, Swedish, Malaysian, Australian, Brazilian, Chinese, Italian, Canadian, Mexican, Argentine, Peruvian, Russian, Latvian, Danish, South African, French, etc., reports, if you’d like to indulge yourself. Four Japanese TV networks sent crews to the ceremony. Russian TV networks NTV and Channel One sent crews to the ceremony.

The science media reports, of course, are a separate universe packed with delights; you might begin exploring those by reading Bethany Brookshire’s report in Science News: “Banana peel slipperiness wins IgNobel prize in physics“.

Here’s our own video recording (from our live webcast) of the entire 2014 Ig Nobel Prize ceremony:

This year, again, we provided a second live video stream: The NSA Courtesy Cam, for benefit of our presumed friends at security agencies around the globe. Here’s the recording of that NSA Courtesy Cam video, which as you’ll see and not hear, had some technical difficulties:

We eagerly look forward to hearing the “Science Friday” specially edited radio version of the ceremony, on American public radio, an annual day-after-Thanksgiving tradition on American pubic radio since 1992. We always admire the way SciFri manages to select and edit chunks of the complex Ig Nobel Ceremony into a coherent radio program.

BONUS from the past: The Japanese network NHK’s documentary about the Ig Nobel Prizes, broadcast on Christmas eve in 2002: