Natalie Sidorkewicz carefully analyzed spine and hip motions of ten couples each having sex in five positions. Sidorkewicz wrote it up, as her master’s thesis :

The main objective of this study was to describe male and female lumbar spine and hip motion and muscle activation patterns during coitus and compare these motions and muscle activity across five common coital positions. Specifically, lumbar spine and hip motion in the sagittal plane and electromyography signal amplitudes of selected trunk, hip, and thigh muscles were described and compared…..

Ten healthy males (29.3 ± 6.9 years, 176.5 ± 8.6 centimeters, 84.9 ± 14.5 kilograms) and ten healthy females (29.8 ± 8.0 years, 164.9 ± 3.0 centimeters, 64.2 ± 7.2 kilograms) were included for analysis in this study. These couples had approximately 4.7 ± 3.9 years of sexual experience with each other. This study was a repeated-measures design, where the independent variables, coital position and condition, were varied five times, respectively. Recruited participants engaged in coitus in five pre-selected positions (presented in random order) for 20 seconds per position first in a simulated condition, and again in a real condition….

Here’s detail, concerning the missionary position, from the study: 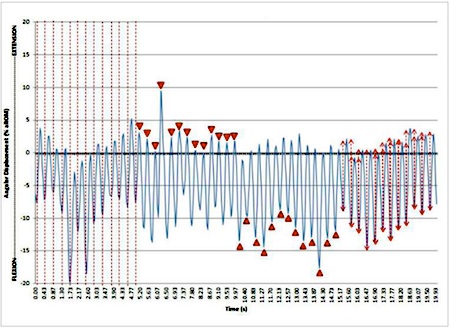 Sidorkewicz also wrote it up in a form that’s about to be published in a journal: