In the tradition of film director Alfred Hitchcock, these researchers watched the way fearful people watched their surroundings whilst walking in fear:

“Visual exploration of the surroundings during locomotion at heights has not yet been investigated in subjects suffering from fear of heights…. Eye and head movements were recorded separately in 16 subjects susceptible to fear of heights and in 16 non-susceptible controls while walking on an emergency escape balcony 20 meters above ground level…. During locomotion, anisotropy of gaze-in-space shows a preference for the vertical as opposed to the horizontal direction during stance. Avoiding looking into the abyss may reduce anxiety in both conditions; exploration of the ‘vertical strip’ in the heading direction is beneficial for visual control of balance and avoidance of obstacles during locomotion.”

This detail from the study shows the experimental setup: 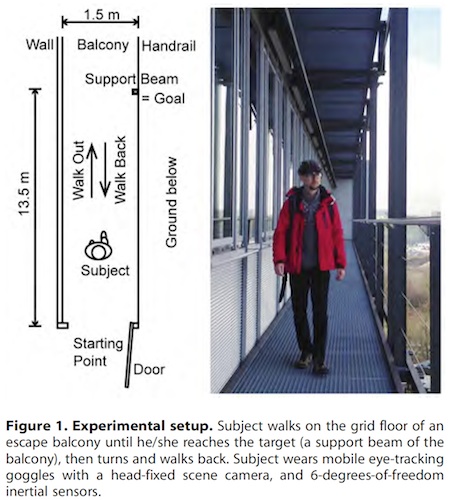