“Physics may aim for simplicity, yet the world it  describes is a mess.”

That’s the start of John Cartwright’s article, “Roll Over, Bolzmann,” in the magazine Physics World. It tells the story of Tsallis entropy: 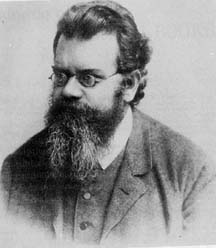 Our definition of entropy is expressed by one of the most famous formulae in physics, and dates back over a century to the work of the Austrian physicist Ludwig Boltzmann [pictured here] and the American chemist J Willard Gibbs. For more than 20 years, however, the Greek-born physicist Constantino Tsallis, who is based at the Brazilian Centre for Physics Research (CBPF) in Rio de Janeiro, has been arguing that entropy is in need of some refinement. The situation, according to Tsallis, is rather like Newtonian mechanics – a theory that works perfectly until speeds approach that of light, at which point Einstein’s special theory of relativity must take over. Likewise, says Tsallis, entropy – as defined by Boltzmann and Gibbs – works perfectly, but only within certain limits….

(Thanks to Ig Nobel Prize winner Andrea Rapisarda for bringing this to our attention.)