Here’s a look back to one of our favorite moments from the first 23 Ig Nobel Prize ceremonies: The awarding, in the year 2004, of the Ig Nobel Peace Prize to Daisuke Inoue, of Hyogo, Japan.

Mr.  Inoue was honored for inventing karaoke, thereby providing an entirely new way for people to learn to tolerate each other.

Here’s video of that prize announcement, and Mr. Inoue’s acceptance speech, and what happened immediately after that. 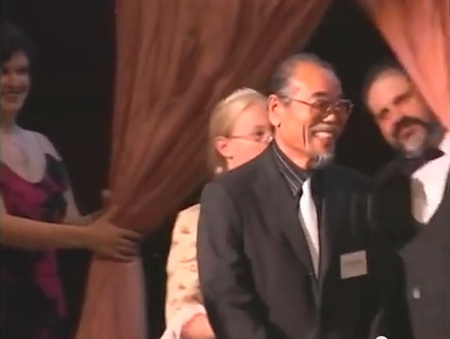 Later, Mr Inoue looked back at that moment, in an interview republished last year in The Appendix (which came to wider attention via an appreciation in The New Yorker).

NOTE: Tickets for Sanders Theater are sold out. There’s a chance that a very few seats will become available shortly before the ceremony. If that happens, we will announce it via the @ImprobResearch twitter stream and on the Improbable Research Facebook page.