Rodrigo F. Fuck made a small stir in the geophysics community, as did Ilya Tsvankin, with publication of this study:

“Velocity variations caused by subsurface stress changes play an important role in monitoring compacting reservoirs and in several other applications of seismic methods. A general way to describe stress- or strain-induced velocity fields is by employing the theory of nonlinear elasticity, which operates with third-order elastic (TOE) tensors. These sixth-rank strain-sensitivity tensors, however, are difficult to manipulate because of the large number of terms involved in the algebraic operations.”

The second section of the paper is headlined “PHYSICAL MEANING OF TOE TENSORS”: 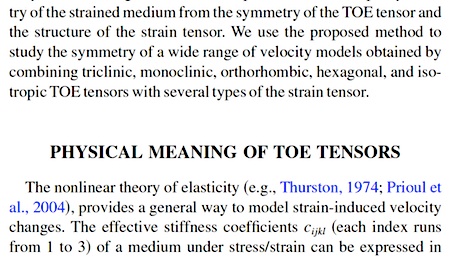 BONUS: On tensors of elasticity