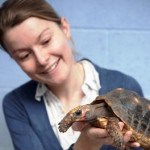 Ig Nobel Prize winners Anna Wilkinson [pictured here, with a tortoise] and Ludwig Huber have now done an experiment with four tortoises and a touchscreen. (Wilkinson and Huber, together with colleagues Natalie Sebanz and Isabella Mandl, were awarded the 2011 Ig Nobel Prize for physiology, for their study “No Evidence of Contagious Yawning in the Red-Footed Tortoise.”)

Four juvenile red-footed tortoises (Chelonoidiscarbonaria–formerly Geochelone) with plastron lengths of 13 cm(Esme), 13 cm (Molly), 12 cm (Quinn) and 11 cm (Emily), took part in the study. The tortoises’ sex was unknown, as unambiguous sexual dimorphism develops only later in the life of this species.