Ig Nobel Prize winner Mahadevan (2007 Ig Nobel physics prize, for studying how sheets become wrinkled) and colleagues have taken an applied-mathematical look at yet another unanswered question. As happens so often with Mahadevan and his merry, varying band of collaborators, a better-than-anyone-had-before answer appeared. Details are in this study:

“we use fine-scale imaging and a minimal mathematical model to study sperm aggregation in the rodent genus Peromyscus. We demonstrate that as the number of sperm cells in an aggregate increase, the group moves with more persistent linearity but without increasing speed; this benefit, however, is offset in larger aggregates as the geometry of the group forces sperm to swim against one another. The result is a non-monotonic relationship between aggregate size and average velocity with both a theoretically predicted and empirically observed optimum of 6-7 sperm/aggregate.”

Ed Yong, in his Not Exactly Rocket Science blog, has a nice essay about this.

Here’s further detail from the study itself: 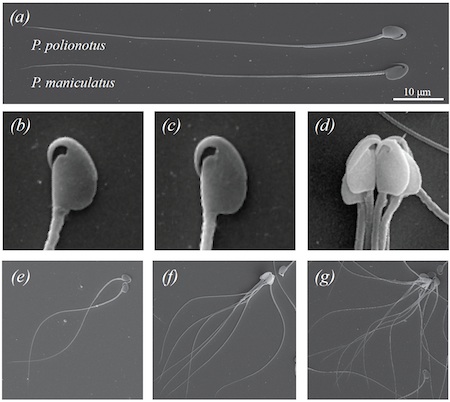 BONUS (possibly not strongly related): The 1956 essay “The Magical Number Seven, Plus or Minus Two: Some Limits on our Capacity for Processing Information“