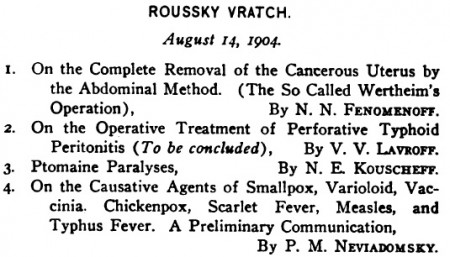 The New York Medical Journal‘s “Pith of Current Literature” section contained summaries of the most important findings in other journals. Most importantly, it summarized foreign-language articles – since nobody was translating entire issues of Riforma Medica or Zentralblatt für Gynäkologie, this was unique information.

In the October 1, 1904 issue we learned about the findings of P.M. Neviadomsky. He’d been very busy.

Neviadomsky announces the discovery of a vegetable microorganism which, he claims, is the cause of smallpox. This organism possesses an extraordinary set of morphological and biological properties. Inoculations of cultures of this germ cause the development of a characteristic pustule and the inoculation of the contents of the pustule produces a series of similar pustules in other animals.

Standard implementation of Koch’s postulates. A material is found in diseased animals, and when transferred to healthy animals, it gives them the disease.

Smallpox and varioloid are caused by the same germ, though this had been known for years (centuries?). Vaccinia is caused by a different germ, which looks the same under an electron microscope — but these should have been invisible in 1904.

At this point the New York Medical Journal editors adopt a tone of amused skepticism.

The author was able to find also a germ which is the cause of chickenpox, but is not identical with that of smallpox. He was not satisfied with these discoveries, and found, further, the germs of scarlet fever and measles respectively, which resembled each other in shape but varied considerably as to their biological properties. The author promises to publish further details later.

That’s a lot for one paper! We don’t know if those further details were ever published, since we don’t speak Russian, and there are a myriad of ways to transliterate “Neviadomsky” and “Roussky Vratch” into English, but it seems unlikely.

One more Neviadomsky finding (now spelled Neviadomski) appeared the following year’s N.Y. Med J. That one was limited to smallpox.