Scientists are a fractious lot. Near the end of a long discussion (in his study “Retinal ganglion cells responding selectively to direction and speed of image motion in the rabbit,” Horace B. Barlow, R.M. Hill, and W.R. Levick, The Journal of Physiology, vol. 173, no. 3, 1964, pp. 377-407.), Horace Barlow writes:

“Much of this discussion is in close agreement with the ideas of Lettvin and his co-workers but we do not feel happy with the names they give their units.” 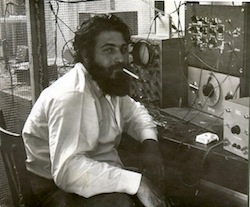 For a discussion of some recent developments, growths from those ideas, see Mo Costandi’s “Crowdsourcing the retina’s motion detection mechanism” in The Guardian.

BONUS: More about Jerry Lettvin (pictured here in a photo from about 1960, when the “Frog’s Eye” paper was new, and things were hopping.)