People with bipolar disorder swing between mood extremes. A team of mathematicians decided to see how much of that swinging they could describe mathematically.

Mason Porter, then at the Georgia Institute of Technology and now at Oxford University, with several US colleagues, published a study in 2009, Mathematical Models of Bipolar Disorder. It appeared in the journal Communications in Nonlinear Science and Numerical Simulation.

Bipolar disorder has always been a difficult condition to recognise and describe in words, let alone equations….

BONUS: Here’s detail from the study: 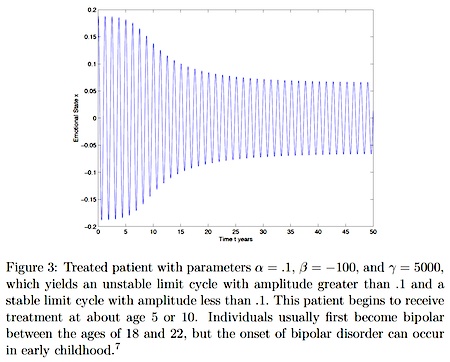 BONUS: Mason Porter wrote a blog commentary about the article.