The University of Science and Technology of China reports, on April 21, 2014, that begins:

A Noble Laureate, also the Keeper of the Broom of Ig Nobel Prize

On April 17th, Roy Glauber, who was awarded one half of the 2005 Nobel Prize in Physics “for his contribution to the quantum theory of optical coherence”, visited USTC and gave a lecture “Two Hundred Years of Light Waves, One Hundred Years of Light Quanta” for the students on the next day. During his visit, professor Glauber accepted a face-to face micro-interview.

A kind of chicken soup for the soul story about Roy Glauber is very popular in China which was published in Reader in 2009. For many years before winning his Nobel Prize, Glauber were familiar to the audiences of Ig Noble Prize, where he took a bow each year as “Keeper of the Broom”. In the chicken soup story, his sweeping the stage was described as a kind of cleaning the dust of mind. When hearing that in the interview, professor laughed and shared the context of the story.…

Here’s a photo of Professor Glauber and the broom and a paper airplane, all illuminated by two human spotlights, at the 2012 Ig Nobel Prize ceremony. The photo is by David Holzman: 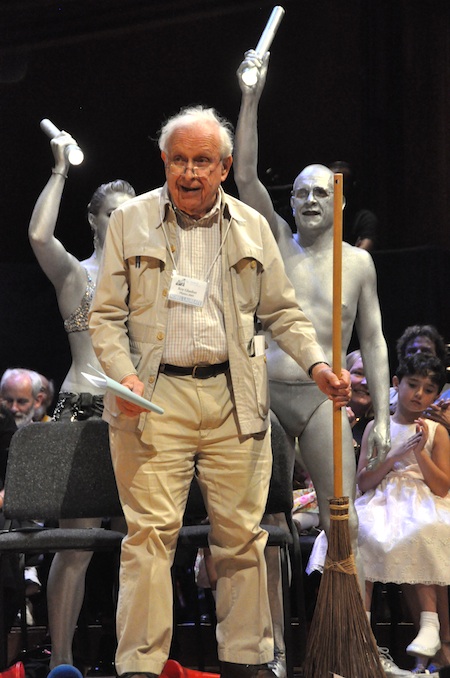