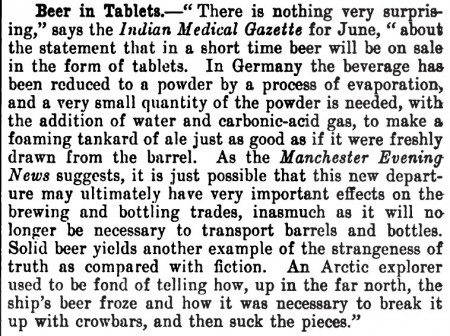 Along with jetpacks and hose-down-able houses, food in pill form has been perennially one of those futuristic advances that is just around the corner. 65 years before Willy Wonka’s three-course-meal chewing gum, German scientists brought us desiccated beer — according to the Indian Medical Gazette, summarized here in the New York Medical Journal [July 22, 1899 — p. 143].

No doubt this was technically possible in some form, but it was desired by nobody, not even arctic explorers.

In Germany the beverage has been reduced to a powder by a process of evaporation, and a very small quantity of the powder is needed, with the addition of water and carbonic-acid gas, to make a foaming tankard of ale just as good as if it were freshly drawn from the barrel. 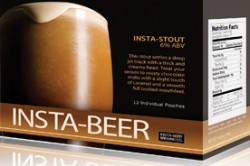 Now in 2014, the dream lives on. Insta-Beer, “the world’s first instant beer”, is available exclusively at KegWorks. And who is responsible? A “dedicated team of German scientists”.