If you watch a movie which shows actors engaging in acts of sniffing, are you likely to sniff along with them? 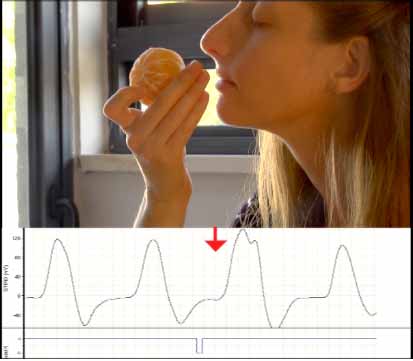 The Olfactory Research Group, of the Department of Neurobiology, Weizmann Institute of Science, Rehovot, Israel have investigated the possibilities, and name such behaviour ‘Mirror Sniffing’. [That’s in the sense of a mirrored or copied action rather than about people who like to sniff mirrors.]

“Subjects watched the movie ‘Perfume’ in an ‘odor clean room.’ This room is subserved by high-throughput high-efficiency particulate absorption and carbon filtration and is entirely coated in stainless steel so as to prevent odor adherence. The movie Perfume was selected because in its first 60 min, it contains 28 movie sniff events (MSEs) where a character takes a sniff.”

Would the participants mimic the movie sniff events? Their nasal inhalations were recorded using a nasal cannula attached to a spirometer, and the results, say the research team, were significant.

“We found that humans sniff in response to olfactory sniffing of characters on screen in a movie. Moreover, the auditory component of on-screen sniffing behavior was the dominant aspect driving sniffing in observers.”

The team’s paper can be read in full here: Mirror Sniffing: Humans Mimic Olfactory Sampling Behavior in: Chemical Senses, 39: 277–281, May 2014. And, a short movie, showing a selection of sniffing events (which may induce mirror sniffing in observers) may be accessed here. [note: in .mov format, a very sluggish 290MB download]

Note: Other oddly contagious behavioural phenomena include, of course, yawning. Though it’s not always contagious. Anna Wilkinson (of the UK), Natalie Sebanz (of THE NETHERLANDS, HUNGARY, and AUSTRIA), Isabella Mandl (of AUSTRIA) and Ludwig Huber (of AUSTRIA) jointly received the 2011 Ig Nobel physiology prize for their study “No Evidence of Contagious Yawning in the Red-Footed Tortoise.”