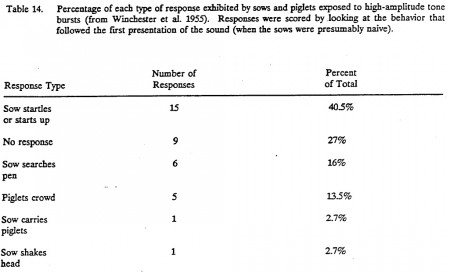 After years of defending legal claims from farmers and others who believed their animals had been adversely affected by sonic booms and other aircraft noises, the United States Air Force sought to find out whether the scientific evidence might be starting to go against them. Bioacoustic experts at the Hubbs-SeaWorld Research Institute, though their expertise was mostly in aquatic settings, were commissioned to review all available studies on the effect of aircraft noise on domestic animals.

This required an exhaustive analysis of papers with titles like “Effect of Simulated Airplane Sounds on the Reproductive Functions of the Male Domestic Chicken”, and “Electrophysiological Correlates of Behavioral Temporary Threshold Shifts in Chinchilla”. The authors incorporated the data from the original studies, got unpublished information from veterinarians and Brooks Air Force Base’s Occupational and Environmental Health Laboratory, and constructed a model of the situations under which animal husbandry is most likely to suffer from low-flying aircraft.

The results were published as “The Effects of Aircraft Noise and Sonic Booms on Domestic Animals – A Preliminary Model and a Synthesis of the Literature and Claims” (1990), an official 200-page report from the USAF Research Laboratory credited to Ann E. Bowles, Pamela K. Yochem, and F. T. Awbrey. From the introduction:

Studies have focused on the effects of sonic booms and aircraft noise on domestic animals since the late 1950s (Cottereau, 1972). Originally, these studies were motivated both by public concerns about what was at that time a relatively novel technology, supersonic flight (see, for example, Shurcliff, 1970), and by claims leveled against the U.S. Air Force (USAF) for damage done to farm animals by very low-level subsonic overflights. Since that time over 40 studies of aircraft noise and sonic booms, both in the U.S. and overseas, have addressed acute effects, including effects of startle responses (sheep, horses, cattle, fowl) and effects on reproduction and growth (sheep, cattle, fowl, swine), parental behaviors (fowl, mink), milk letdown (dairy cattle, dairy goats, swine) and egg production. Several reviews of earlier work have been published (e.g., Dufour, 1980; Bell, 1972) but these do not include a number of significant foreign studies, including recent, detailed work by the veterinary school in Hannover, nor do they attempt to develop a theory for how noise affects domestic animals.